Tests were conducted on aliens

This week's, or should I say last week's, blog post is a little late since we've had all sorts of crazy stuff going on, sorry 'bout that. We should be moving to new premises soon, and we just got our new website published a while ago. If you haven't seen it yet, please take a look and let us know how you like it!

To this week's topic then: We were lucky enough to get some Kajak students to help with testing Break MORE Aliens! last week, and the results were very interesting. Thanks to everyone who participated!

We thought this would be an excellent chance to take a closer look at BMA! through some of those comments and suggestions we received. We will explain some original game design decisions as well as why we are willing to tweak some parts of the game based on the comments. 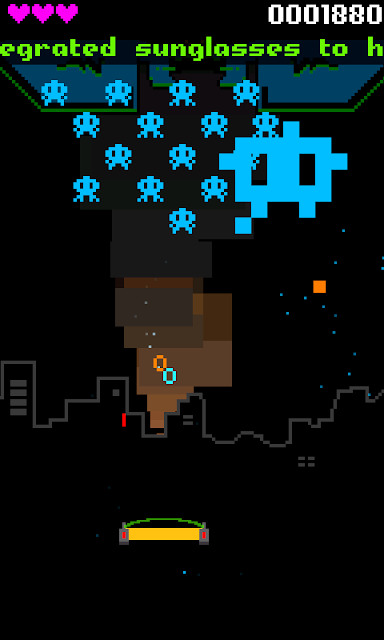 "The balls bouncing is too slow and the player have too much time to do nothing."
"The scrolling texts are disturbing, because I don't know where I should concentrate."

We're not certain whose idea the scrolling texts were originally, but one of the reasons we have kept them there is that reading them is precisely the kind of thing player can do when the ball is taking it's time bouncing around, which would be pretty hard to mend without breaking the core gameplay too much. We were happy to also receive positive comments about the quotes, which has been the general feedback in the WP7 Marketplace as well. Few of the quotes actually contain information that is more important to player, and we've made those bright red to help them stand out more. However, we decided to remove all other colors from the quotes and also make the default color a bit dimmer as well. Thank you for pointing those out!


"There are quite a few powerups, which is a good thing on the other hand, but that's why you should make them more regocnizable. Which affect the paddle, which affect the ball, which are 'general' powerups"
"Powerups are very unclear. The laserblasters look like a beer bottle, and the others are pretty random expect the resize icon."

This is something we have been somewhat worried about as well, but there's only so much you can do with the limited amount of pixels. The original game had higher resolution powerup symbols, but they were against the overall visual style, and more importantly, appeared so small on the screen that it was still very hard to make out what they were supposed to represent. We also received several comments about there being too much powerups on the screen at the same time, so we reduced the amount a little.


"The player can't tell from the hearts that they're the extra balls and that player's board shows the health (?). This is a good solution otherwise, but you should put balls in stead of the hearts, if I understood correctly."
"The health hearts are also unclear as to what they refer to. Do they mean how many extra balls I have left or do they mean how many hits I can take from the aliens?"

Actually this might be something where we have probably made a mistake with the game design by making it overly complicated while trying to actually keep it simple. There are three ways those hearts can be lost during a game: Whan a ball is lost (so they are kind of like extra balls), when aliens reach the bottom of the screen, and when player takes damage. We felt it was the simplest solution to combine these, and then added the most obvious symbol we could think of from the world of videogames, the heart. By the way, the condition of the city in the background also reflects the amount of hearts the player has left, did anyone notice that?

"The cannons on the side of the board don't feel like a very powerful powerup, their rate of fire is so low."

All you need to know about the laser cannons is that they're stackable, and you should aim to stack five of them. ;)

"Why the nuke is exploding in the city!?! Shouldn't the player protect it ? Also, the nuke flashes the screen witch makes the game uncontrollable for a second and this is issue when you should see the ball and the bat."
"I think it [the nuke] should be THE powerup, one that leaves positive feeling to the player without any negative effects."

Nuke is meant to be a double-edged sword that player should avoid in some situations. In the original game Nuke did two damage to player, but we decided to nerf it down to one. The bright flash is also a part of this "double-edger sword philosophy." Although it may be a little weird in the otherwise light setting of the game, the Nuke is one of the elements that also has a deeper meaning, and we also wanted to make a little room for tactical thinking in the seemingly simple gameplay. Whis is why there are other powerups with seemingly negative effects, such as the one that shrinks the brick.

"The pixel art/retro look is really nice and works well with the music."

Thank you! We saw similar comments a lot, and we're very happy for that fact. Retro always has it's place, and we were very lucky to find such fitting music when we worked on the original game. Again, the musician is Multifaros, you should definitely check out other stuff he's done as well!

If you feel like discussing more, please do, and thank you for hearing us! 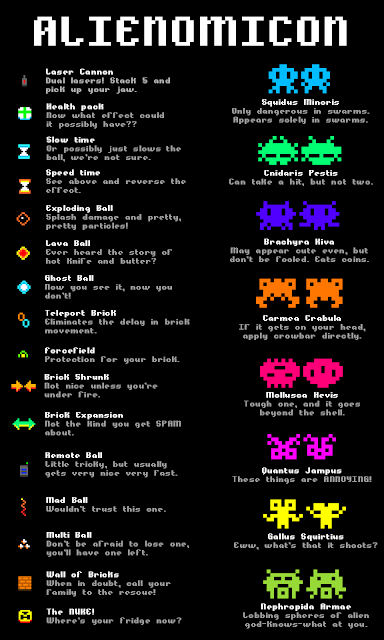 Posted by Team Jolly Roger at 6:00 AM